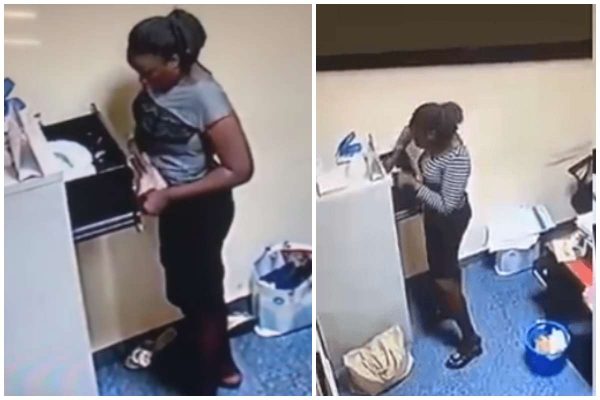 A lady known as Ife Aboyeji, who is an ND II student of Business Admin in Yabatech, Lagos, has been caught on tape stealing from her boss.

According to reports, If was caught by a CCTV camera stealing  N500K while on IT.

Reports also have it that her father is an accomplice in the crime and committed the act during having only worked three months with the organization.

Ife has reportedly stolen twice without being caught until the third time yesterday when her madam walked in on her and caught her red handed. The CCTV also showed the previous times she had stolen from the company.

This is Ife Aboyeji, a ND ii Student of Business Administration in Yaba College of Technology who was on SIWES in an organisation and carted away with over 500k within her 3months in the organisation. Investigation reveals that her father is an accomplice as he has been benefiting from the proceeds of theft.

Train your kids well so they don’t end up being an embarrassment to not your family alone but the society. Yabatech management must take actions as her act has brought disrepute to the institution.

#Nigerian #Graduate Ife Aboyeji A ND ii Student Of Business Admin in #Yabatech who was doing her SIWES Program in A Big Company CaughtRed Handed Both By Her Boss and #CCTV Camera Stealing N500k Cash!!! She had first stolen some money and No one noticed, So today she went again to steal in the Morning and No one also Noticed, Now feeling super Confident that she was getting away with all hercrimes and certain she would never be Caught she went back again for the third time in the Afternoon to steal again that was when her Madam worked in on her and After they now Reviewed the CCTV camera footages All Her previous atrocities came to Light!!!