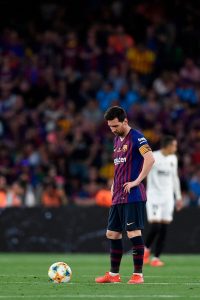 Barcelona’s hope of clinching another silverware was dashed yesterday night when Valencia beat them by two goals to one in the final of the Copa Del Rey.

Valencia quickly put two unreplied goals past the Spanish champions in the first before Lionel Messi halved the deficit deep into the second half. His second-half goal only proved to be a consolation as Valencia held on to the win.

Despite the defeat to Barcelona, Lionel Messi still se5 another record with his goal as the goal set him up as the only player to score in six consecutive Copa Del Ray finals.