Ghanaian actor, Chris Attoh, has been bereaved. According to reports, his wife has been shot dead.

Reports have it that Bettie Jennifer was murdered by an unknown gunman while leaving her office in Maryland on Friday evening May 10th at about 5 pm.

Bettie had reportedly was walking to her car when a man armed with a handgun approached her, as she tried to run away, he followed her and a shot at her multiple times with one shot hitting her.

The suspect has been described as “a black male with a thick build and black hair, wearing a dark shirt and pants.”

Chris and Bettie tied the knot in a ceremony in Accra October 2018. The actor had tongues wagging last week when he deleted all her photos on his Instagram page. 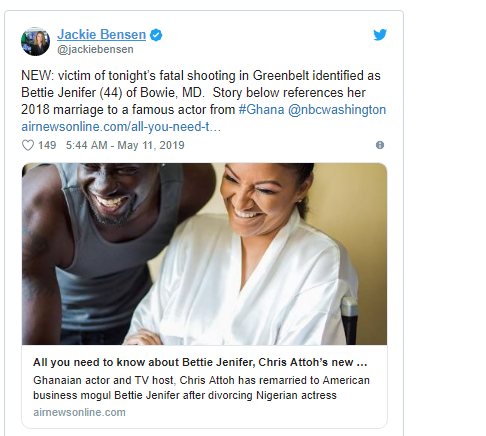