Recall that the singer had a clash with rival dancehall artiste, Stonebwoy on stage. Apparently, the singers had a fall out at the Vodafone Ghana Music Awards as Stonebwoy bagged the ‘Artiste of the Year‘ award.

Shatta Wale and his crew decided to storm the stage to congratulate the singer but the kind gesture was greatly misunderstood by Stonebwoy and his crew. Things escalated quickly as there was some shoving before Stonebwoy pointed a gun at Shatta Wale and threatened to shoot him. 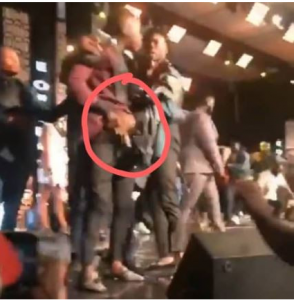 Both artistes were eventually carted away by the police and arrested before they were released on bail.

Shatta Wale took to Instagram today May 23, 2019 to a picture of his bleeding palm with the caption:

“Upon sober reflections of events in recent times and having made broader consultations, I wish to announce that I will not be part of the Ghana Music Awards scheme going forward. God bless!”