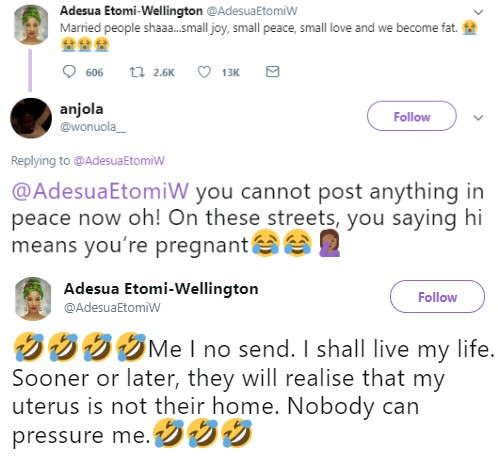 Nigerian actress Adesua Etomi has taken to Twitter to call many out over their incessant worrying over her being pregnant or not.

The Nollywood actress who tied the knot with singer Banky W back in 2017, took to Twitter to slam many who keep saying she is pregnant and or when she will get pregnant.

Me I no send. I shall live my life. Sooner or later, they will realise that my uterus is not their home. Nobody can pressure me.

The actress had many tongues wagging online after she tweeted about her weight gain, saying she is happy and at peace. This caused for many to again pick up the pregnancy talk, a talk she has since made known , she is not bothered about.