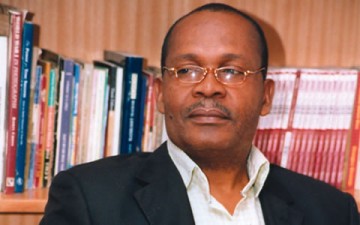 The All Progressives Congress (APC) in Lagos has warned a Peoples Democratic Party (PDP) chieftain, Bode George, to stop fabricating lies against a national leader of the ruling party, Bola Tinubu.

In a statement by the Lagos chapter of the ruling party on Monday, it queried George for supporting Kola Abiola’s lie that Tinubu begged the late General Sani Abacha for the post of commissioner in Lagos State.

Last week, the son of the acclaimed winner of 1993 election, MKO Abiola, Kola Abiola, had whipped up a storm after he said that “ It was after Tinubu had lost out that he decided to join hands with the National Democratic Coalition for the actualization of June 12 mandate.”

Speaking, the Lagos APC Publicity Secretary, Joe Igbokwe described George as a failed politician, who lacked a proper knowledge of history, hence his support for Kola.

Igbokwe said the statement was meant to set the record straight, in order to deter naysayers from bringing it up again and again,  “so that some people will not believe it as the truth.”

Igbokwe , who was against the annulment of the June 12 election, and a foremost campaigner of his stance, said: “Before the annulment of June 12, 1993, Presidential Elections Governors, Senators, House Of Reps Members, State Assembly Members had been in place and to all intents and purposes Asiwaju Bola Ahmed Tinubu was one of the elected Senators from Lagos.

” Now how can an elected Senator be asking for a mere appointment as Commissioner? Does it make sense to anybody who is privileged to be a sensible person?”

Igbokwe described the said the former Ondo Military governor’s fervent criticisms of Tinubu were only borne out of bile, hatred and jealousy.

He said while the former Lagos state governors continue to enjoy a rising profile as a credible leader and crowd puller, George, on the other hand, has continued to wallow in devastating electoral defeat and multiple failures.

Igbokwe added: “We do understand the reason why Chief Bode George always have this penchant to get at Asiwaju Bola Ahmed Tinubu at the drop of a hat and even when it is not necessary.

“The gap between Asiwaju BAT and Chief Bode George in terms of political sagacity, leadership, achievements, followership, capacity, acceptance, credibility etc is a huge one in favour Of Asiwaju.

“George has found himself in a miserable political position in Nigeria in the past 20 years.

He added: “everybody knows that Asiwaju kept him in that miserable situation and only a baby will think that he will be fair to Asiwaju in anything at all.

While it is possible for Chief Bode George to work so hard to get to ASIWAJU’s level in the next 20 years, it is difficult, if not impossible, to bring Asiwaju to Bode George’s pathetic level in order to bridge the gap”