Former Aviation Minister, Femi Fani-Kayode, is not in any way happy with Pastor Kumuyi following the latter’s recent post about President Buhari.

The Clergyman and founder of the Deeper Christian Life Church advised Christians to stop attacking President Buhari through every means available to them.

Kumuyi who made this known at his Church in Gbagada yesterday Sunday, June 2nd, said it is not good to attack a person of authority.

God deliver us from shepherds that slaughter the sheep,that defend the cruel,that support injustice,that love the wicked,that serve the tyrant,that despise the weak,that enslave the poor and that worship genocidal maniacs and sociopathic butchers. 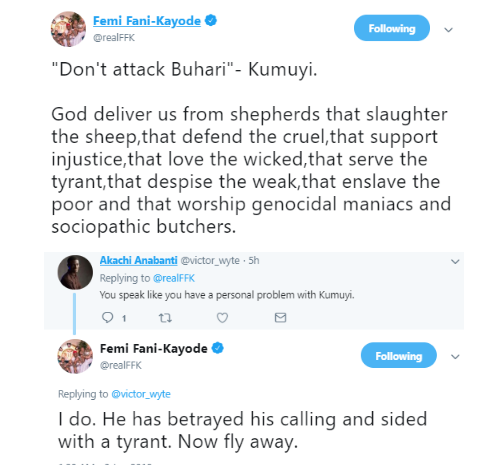 Share
Facebook
Twitter
WhatsApp
Previous article[Video]: Billionaire Owner of Coscharis Motors Spotted Evangelizing On The Street Of Lagos
Next article[Photos]: Ini Edo puts on a busty display as she sizzles in new photos
- Advertisement -Ad ==> Discover how a young Nigerian graduate now makes a consistent 40k per week doing a legitimate online business. You too can start yours now, click here!!!