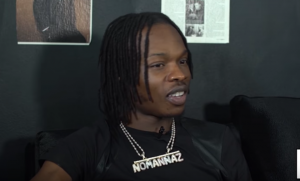 The controversial singer dropped the new single after making his Nollywood debut in a new movie titled ”The enemy I Know” which is scheduled for release next week.

His fans, the Marlian as they are fondly called would definitely enjoy this new club banger. Nairamarley was released from the EFCC net recently after spending weeks in their net on allegations of involvement in internet scams.