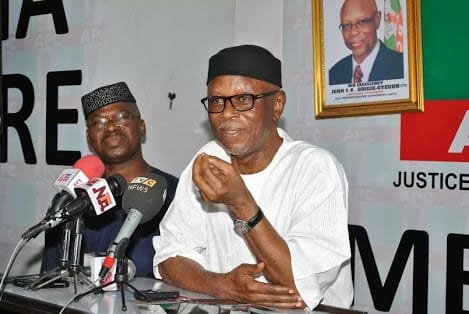 Former National Chairman of the All Progressives Congress (APC), Chief John Odigie Oyegun has described the leadership style of the present National Chairman, Adams Oshiomhole as that of an “agbero”.

This according to Oyegun has chased many people from the party — While adding that Oshiomhole lacks the capacity to lead the ruling party.

The former APC National Chairman made this known through his Public Affairs Adviser, Chief Ray Morphy in a statement on Sunday.

He said: “That statement of Booby Traps is ludicrous and infantile, an attempt to drum up justification for the failings of the party under Oshiomhole Chairmanship. Oshiomhole failed because he lacks the temperament that is required to run a political party.

“He lacks the capacity to manage the different interests and tendencies that constitute a political party. He engages his mouth before engaging his mind, so he offends party members. So, how does that constitute booby traps by Oyegun, the erstwhile chairman?

“Already, the Deputy National Chairman has confirmed that Oshiomhole runs the party with recourse to the NWC. He acts in direct opposite of decisions taken by NWC. No minutes of NWC meetings which in any event take place outside the party Secretariat.

“How would you not have a crisis in states with the confusion that Oshiomhole created when he gave the states the freedom to choose their methods of choosing candidates for elections. Much of the crisis in states arose out of sheer incapacity on the part of the current chairman. How has this Oshiomhole incapacity become booby traps by Oyegun?

“Many party men were aghast at the unfairness and injustice meted them during the primaries process. Only a bad carpenter quarrels with his tools. Indeed Oshiomhole is degrading and demarketing the party, rather than seek to bring more people on board, he is rather chasing people out of the party with his agbero style of engagement. ”