A lady identified as Tosin Adewale has taken to Twitter to recount her shocking experience in Lagos. 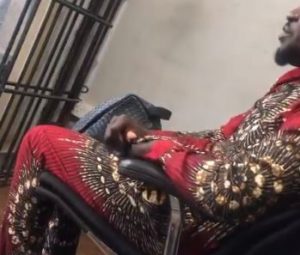 According to her, she ran into a photocopy shop while it was raining in Lagos yesterday, June 29, 2019. However, a man joined her as well to take cover from the rain.

She revealed that they had a decent conversation until things took a turn for the worse. All of a sudden, the man began to make sexual advances at her to the extent he whipped out his penis and was caressing it.

ALSO READ: Naira Marley Replies A Fan Who Accused Him Of Repeating A Shirt

watch the video she shared below:

So, I’m here in a photocopy shop At opic plaza, trying to avoid the rain. Then I met this man who is sitted right in front of me. Saying he’s trying to avoid d rain. At first we had a decent conversation, so I thought he was mentally stable until now. pic.twitter.com/q33W9t4Cub