Former minister for aviation, Femi Fani-Kayode has reacted to the claims of the Ohaneze Ndigbo that there is no future for Nigeria because Northerners are unreasonable.

Femi Fani-Kayode pointed out that Northerners are not the only one responsible for the woes of Nigeria, as the disunity among the Southerners is also a major problem affecting Nigeria.

“I am amongst the strongest critics of northern hegemony and domination and nothing is happening today that I did not say would happen if Buhari was elected President both in 2015 and 2019.

Yet the truth is that we cannot blame everything on the north because southern leaders are their own worse enemies. We are weak, divided, petty, ignorant, gullible, naive, petty and cowardly.

Worse of all we behave like crabs in a basket: always pulling one another down and always attempting to eclipse and destroy our own brightest stars.

Northern hegemony and northern domination is manifest in every sphere and sector of the Nigerian space only because the ever-grovelling, ever-slavish, ever-quivering, ever-quarrelling and ever-snivelling southern leaders, who are so comfortable with betraying and abandoning their own mid-stream, gladly allow it.

If we want things to change the first thing that we need to do is to accept the fact that southern unity, the southern commonality of purpose, southern fraternity, southern co-operation and southern cohesion and understanding are fundamental pre-requisites to southern emancipation.

The secret to the remarkable success of the north is their wholehearted appreciation of the power of unity and the importance of furthering their collective interest regardless of political party affiliation.

This is something that the south appears to be simply incapable of appreciating, achieving or enjoying. We are our own worse enemies.” 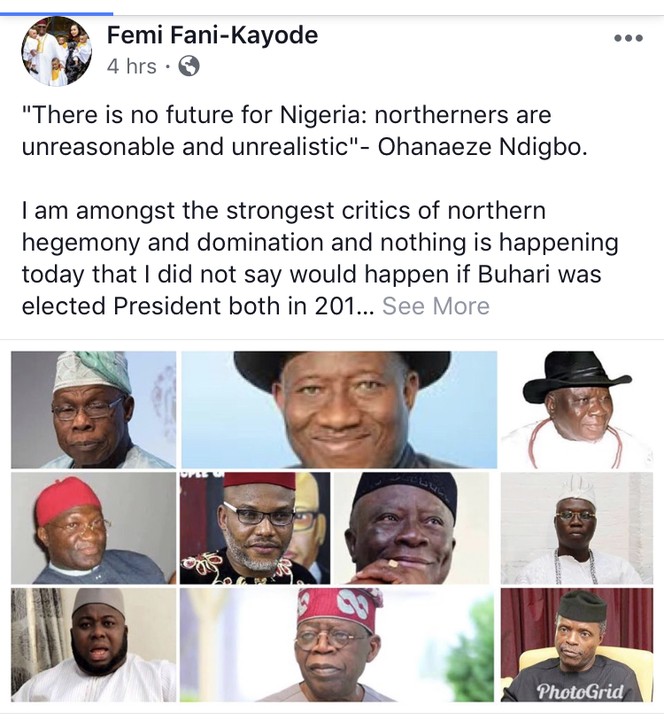