Popular activist, Deji Adeyanju has reacted to the ruling of the Supreme court to uphold the victory of Gboyega Isiaka Oyetola as the Governor of Osun State.

The Supreme Court on Friday ruled that Governor Gboyega Isiaka Oyetola won the 2018 Governorship election and dismissed the case of Senator Ademola Adeleke.

However, the news has not gone down well with members of the opposition party as they have lamented over the bad state of the judiciary in Nigeria.

Deji Adeyanju pointed out that only a brave and incorruptible judge could rule against the ruling APC, but at the moment almost all the judges in the country are corrupt. (Strong allegations!!!) 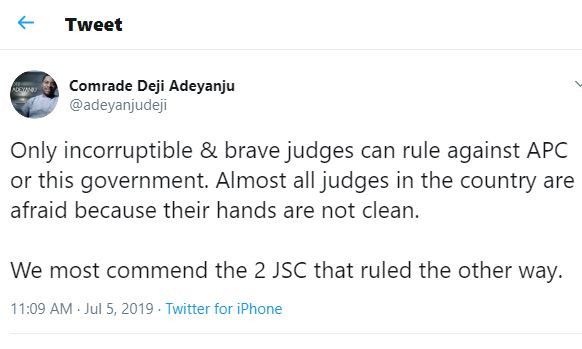 In other news, Senator Adeleke Ademola has congratulated Governor Oyetola as he declared that he accepts the decision of the Apex Court.