Former Nigerian aviation minister, Femi Fani-Kayode has shared his thoughts on the news about the death of US billionaire, Jeffrey Epstein.

Recall reports recently stated that Epstein was found dead in his cell in an apparent suicide.

An investigation has been launched by the Federal Bureau of Investigation (FBI) to unravel the mystery behind the death of the billionaire.

Reacting to the news, FFK said, ‘I do not believe that Jeffrey Epstein committed suicide. I smell a rat! There was no way that the system would allow him to live knowing he was likely to expose so many paedophiles in high places if he ever cut a deal with the Feds’. 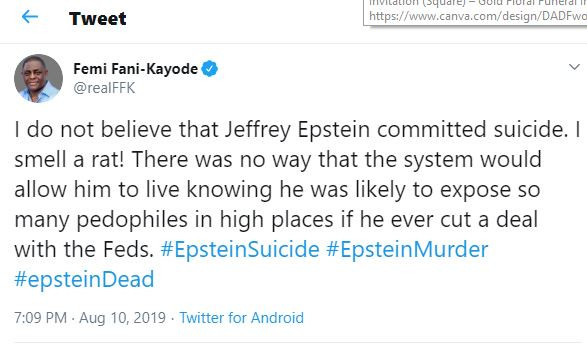