Barely eight weeks to Christmas, Nigerians are experiencing frustration and pains over the hike in the prices of staples; decline in business activities of some traders; as well as inflation headache. Both traders and consumers have expressed mixed reactions in the closure of Nigeria’s land borders, Gbenga Odunsi reports.

Recall that the Federal government of Nigeria, on 13th August 2019, sealed Seme border without formal or prior notice. The Seme border, according to investigation, is one of the bustling boundaries, and is the chief course for the importation of food items such as rice, chicken, and turkey into the country.

The Nigerian borders remain occlude in the face of warning from West Africa’s regional grouping that the seal up is harming economic prosperity.

The Economic Community of West African States (ECOWAS) urged the federal government to recrudesce its borders.  It warned that the closing of border crossings, which prevents the free movement of people, contravenes agreements signed by Nigeria.

Although Nigeria’s resolution to close its land borders was projected at cracking down on smuggling. But traders in adjoining countries say their businesses have shut down as a result. Similarly, the closure has exerted inadvertent consequences on the prices and availability of some food items in Nigeria.

“We cannot allow smuggling of the product at such alarming proportions to continue,” President Muhammadu Buhari was quoted as saying in a statement released by his media aide shortly after the border closures. However, the federal government has claimed that the closures are bearing desired results, and it had seized hundreds of bags of ‘smuggled’ imported rice.

The prices of such staples as rice, frozen chicken, frozen turkey and groundnut oil — which often finds their way into the country from neighbouring ECOWAS countries via the borders — have ballooned as they become sparse in the local market, Information Nigeria authoritatively reports.

Rice produced locally, it was gathered, is yet to equivalent local demand standards based on quality and quantity. One kilogram of frozen turkey now sells for N2,200. There has also been a spike on other food items premised on the closure of the border.

The final consumers of the affected commodities have wailed the stinging effects of the federal government’s action, which according to them, has impelled a sharp shortage of food items and further swelled their prices.

In the same way, the condition with traders — predominantly the middlemen in the distribution value chain of the food items — is not any better.

A market trader at mile 12 market in Lagos, who does not want to be named, lamented that border closure is affecting business activities, adding that local rice, which would have been a better alternative, is short in supply. According to him, closing up the border at this time, few weeks to Christmas, is a wrong decision by the government. He further pointed out that the yuletide season will be accompanied by hardship if the government does not rescind its decision.

Taofeek Ibrahim, 41, who deals in frozen chicken and turkey at mile 12 market, says the closure of Nigeria’s land borders has led to shutdown of businesses for some traders, and commodities are not available for them to sell.

“Following the closure of Nigeria’s border, frozen foods have become very scarce commodities in the market. Nigeria has been doing well with the importation of these items. The locally produced ones are not sufficient to meet the market demand, unfortunately, the prices have increased.

“Before the closure, a pack of the Nigerian chicken costs about N8,000. If you go round the market now, you will find out the price has increased  N15,000. Moreover, local processors of frozen foods have not been able to meet market demand. When we demand for 100kg of chicken, they are only able to supply maximum of 25%.

“The hikes in these prices, accompanied with inability to meet up with demands have stopped customers from patronizing us, they have shifted their attention to the consumption of fish,” Ibrahim said. 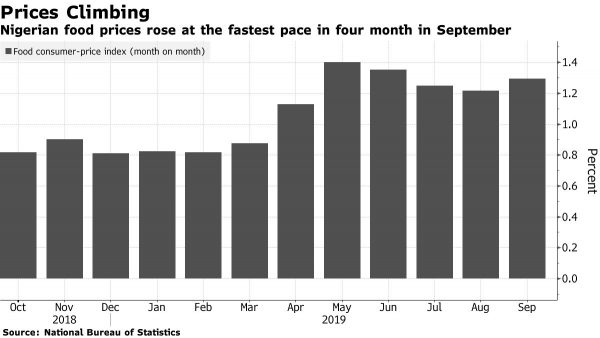 Taiwo Oyagbesan, a rice seller, in his own view, posits that closure of Seme border has affected the importation of foreign goods into the country. He bemoaned the adverse effect the closure is having on his business, which in turn affects his survival and that of this entire family. Taiwo added that the closure has skyrocketed every commodity in the market.

Mr Oyagbesan lamented that he had not been able to sell both the local and foreign rice in his shop because the price has swelled and Nigerians are unable to afford it. He says he foresees hardship on average Nigerians this yuletide season.

“Customers who are used to buying Basmati rice for N5,375, when you now tell them it is 8,000, they quickly turn away and look for another alternative such as spaghetti.

“Since morning wey I open shop, I never sell anything, and it has been like that since September, Sales has dropped drastically, Taiwo said.

He added that effort to redirect their market operation to accommodate locally produced rice yielded no fruit as many Lagosians complain about the local rice. Moreso, the brand is not readily available to serve the whole of the state.

Oyagbesan urged the government to reopen the borders to allow Nigerians go about their daily business and hustle for survival. He added that if the border must remain closed, government should ensure that the productions of local commodities are improved.

Adding to the pressure of low supply, many dealers, Information Nigeria gathered, are hoarding the commodity with the intention of selling at increased prices during the Christmas festivities.

On his part, “we have been consuming homemade foodstuffs since the closure of borders.

“I think the closure is a good decision by the government, Omoboriowo told Information Nigeria.

“The closure has improved production, and locally-grown rice is now available in many markets.

Omoboriowo, however, believes the situation of the country requires patience as the government is doing a turnaround.

“Predominantly, Nigerians import almost everything through the Seme border, and if there is going to be a stoppage, it will take time.

“Nigerians want fast solutions, but if the government plays its own part to lessen the effects of the closure, then very few people, the ungrateful one, will complain of hardship.