Legendary Nigerian actress, Genevieve Nnaji has joined millions across the world in mourning the demise of popular Basketball star, Kobe Bryant and daughter who passed on in a tragic helicopter crash that occurred on Sunday, 26th January.

Genevive in her description of the late basketball star said he was more than a winner and a champion.

She further described him as a hero every daughter wished for before asking him to rest on.

He was more than a winner and Champion. He was the hero every daughter wished for. Rest In Peace Kobe and Gianna. 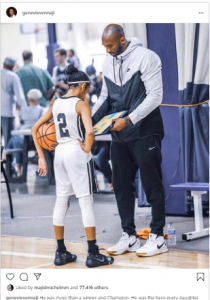