Controversial radio personality, Toke Makinwa has announced that she is expecting the arrival of her new baby, despite being unmarried at the moment.

Speaking via her official Instagram page, the controversial figure stated that she is currently expecting her girls for games night so as to celebrate the new baby.

However, it remains unknown if the baby is a child, a car or any other inanimate thing.

Toke who is more famous for hosting the morning drive was previously married to fitness enthusiastic, Maje Ayide. 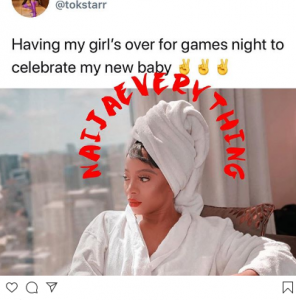