Popular humour merchant, Ali Baba has frowned at the culture of begging among people with disability with an emphasis on the deaf and the dumb.

Speaking in an Instagram post on Tuesday, he further asked if the deaf and the dumb ask for help while trying to impregnate their wives before going on to share the tale of how a deaf and dumb worked hard despite his challenges.

“I want you to consider this matter.


“I was in Kaduna for a few days. And while engaging some of my Northern Friends, one of them an Emir, another a retired customs officer, a former senator and a one-time former governor, we all agreed on something.

“After so many discussions, that increasing number of uneducated people amongst us will continue to hold us back, in all indexes of growth and development.

“The culture of social sympathy for Nigerians instead of empowering them, is going to be the generosity of a people that comes to bite us in the end. No pun intended.


“Just think about it.

“In my teenage days, I went to #AgbarhaOtor with my parents, during one of those long holidays. And there was this deaf and dumb, as they were ignorantly identified then. His job was fetching firewood and splitting trees for firewood.

“He was always loaded. Used to dash me money just to do break dance and moonwalk for him. He would break into a smile when I broke any of my body parts.

“Samson was strong. He humbled every tree that came his way. He was all about turn over.

“Much as we would be sentimental about this matter, I believe empowering physically challenged Nigerians, is more important than using them as an excuse to be generous.

“As the Emir explained, a deaf and dumb guy can wash cars, grind pepper, farm, fish, work as vulcanizer, be a Maisha, mechanic, ride okada, paint houses, boxing, long jump, tailoring, swimming, own a shop, be a shoemaker…

“And jokingly added, does the deaf and dumb ask for help in impregnating his wife? Does he need help to eat?

“Because if a visually impaired person can find work, a person who can see and walk… has no excuse.” 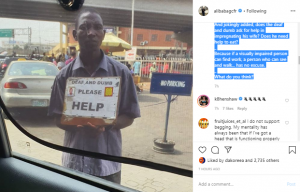