Nollywood actress Regina Chukwu has found herself in a heated position following her post last night.

The actress had shared a post about making up with people all because of the saying life is too short.

This came after Iyabo Ojo and Dayo Amusa’s posts to Faithia Balogun, posts that saw Iyabo Ojo calling Faithia out for being a backstabber while Dayo on her part celebrated her months after both into a fight. 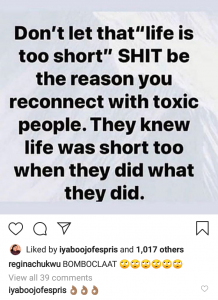 This got many of Regina’s fans talking as they felt she was taking sides with Iyabo. 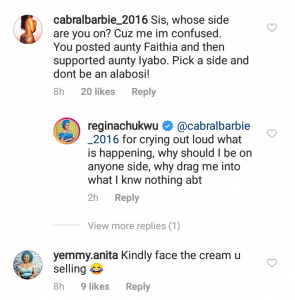 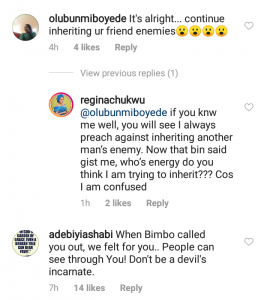 The actress has now taken to her page to react to all the claims saying;

”Okay just work up now and noticed that a post I saw on @remmysworld and reposted is making some jobless, enemies calling them selves Fan type rubbish on my post, where all that is coming from I don’t even knw … ehayyy sssshhh look here! Yes, you, I be typical igbo girl, I don’t face the business that doesn’t PAY me and I don’t chook mouth on watin no consign me! And stroll down my page you will see the 2020 code!! Don’t bring your devilish tot here o, don’t let Lagos bridge fall on you o … like some said allow me face my CREAM SELLING BUSINESS ON IG … do not use your stupid tot and put me where I don’t want to belong! Good morning!” 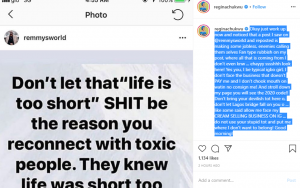