Taking to his official Twitter handle to share the story, he said they met at the airport but they denied each other a handshake.

Reacting to his tweet, Mayorkun called the act: ‘say no to coronavirus.’

“Peruzzi wrote: Just met@iammayorkun at the airport omo no handshake, na we do.” 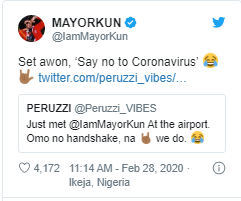