Media personality, Fola Foalyan has taken to Twitter to share the story of a woman who was murdered by her husband.

According to Fola, the woman, a mum of three had gotten away three months ago due to the excessive beatings from her husband.

He, however, found out where she was, stormed the place and strangled her to death.

”A mother of 3 was beaten to death in my neighborhood by her husband. Crazy thing is, she had left him 3 months ago because of the beatings. He then found where she was to go and beat her there. He strangled her. He’s been arrested.” 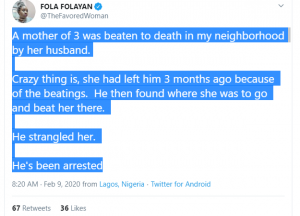