Nigerian senator Adamu Garba is far from done with women and his idea of how they should be.

Taking to his Twitter account, the Nigerian senator first attacked feminists, saying they all are wasting their time before calling out two prominent women and feminists Beyonce and Chimamanda.

Read Also: ‘Being A Wife Is More Important Than Anything’ – Senator Adamu Garba

According to Garba, these women deceive others every day with feminism, despite being married to men.

”Women should all be WIVES, a jewel crown. Their proper position should be protected against the troubles of

etc, who are successfully married to men, yet deceiving our gullible women on daily basis Women should marry with pride & support their husband.” 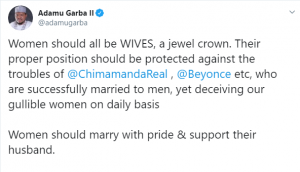