Reno Omokri is of the opinion that people should never reveal their plan to others.

According to the author, when anyone reveals their plan to people, they tend to end up getting stolen.

Read Also: Presidency Lost Jonathan, Not The Other Way Round: Reno Omokri

Omokri continued saying this should stop, adding that people also do not need to explain themselves to critics, instead, they should work and let their result do the talking.

”If you show people your plans they may steal them. Better to implement them and show them your results. That is why you should never explain yourself to critics. That is like giving a robber the plan of your house. It will only make his job easier. Many times, it is what you told people that they use against you. Be like King Solomon, who ordered his workers to build the Temple in silence, but held the biggest party in the world when the work was completed. It is easier to abort than to kill.”
#FreeLeahSharibu #RenosNuggets” 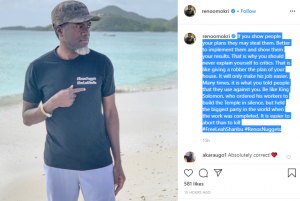