Nigerian author and former aide to ex-president Goodluck Jonathan, Reno Omokri, has taken to his page to remind Nigerians of just how terrible the dethroned Emir of Kano is.

Taking to his IG page, Omokri, again brought the attention of many to the story of then 13-year-old Ese who was abducted by a bike rider known as Yunusa.

He went on to state that same Emir who preached against child marriage, publicly defended Yunusa.

”Emir Sanusi preached against child marriage. He knows it is what Southerners want to hear. Yet, when Yunusa abducted 13-year-old Ese, and took her to Kano, Sanusi protected Yunusa in public and in private.

“It was not until Punch started the #FreeEse campaign that public opinion FORCED Sanusi to abandon his stance.

“According to Ese’s mother, Mrs Rose Oruru, she was insulted and assaulted at Sanusi’s palace when she went to beg for her daughter’s release. Please Google it. Yunusa appeared in court with a high priced lawyer, Kayode Olaosebikan.

“Who paid for this lawyer and Yunusa’s ₦3 million bail? Yunusa was an okada rider. He didn’t have that type of money. Nigerians and our short memories! 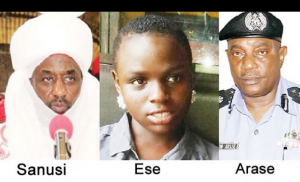