Home Entertainment You Can’t Dance With A Person Who Does Not Want To Dance...
Facebook
Twitter
WhatsApp

Actor Mofe Duncan has opened up on why his marriage to Jessica Kakkad failed.

The actor had first taken to his IG to celebrate his new woman on her birthday.

He then went on to share another post speaking about falling in love again, and according to him, he has “too much of it (love) to give, and because one failed doesn’t mean all will fail.” 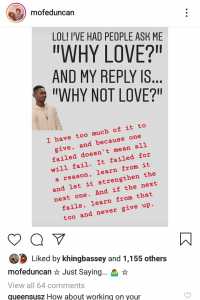 A follower then replied, saying the actor looks like one who gives up on his relationship, rather than work on it.

@queensusz wrote: “How about working on your relationship? You sound as if you are too easy to throw in the towels. Been married for 9 years, there were times when we wanted to give up but we realized that we are two imperfect people. We have kids, we have love and we have to work through it all and come out stronger! Marriage isn’t for arrogant and conceited people. Even the tongue and teeth fight at times, there is no perfect union but try to learn to say ‘I ‘m sorry, forgive me, I love you, I miss you, you are the best, I will be better etc’ but saying that if it fails, you try again! Nah eba you dey soak?” 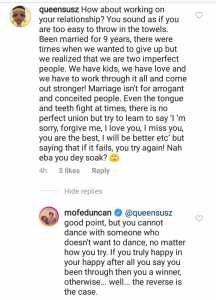 And Mofe Duncan responded: “@queensusz good point, but you cannot dance with someone who doesn’t want to dance, no matter how you try. If you truly happy in your happy after all you say you been through then you a winner, otherwise… well… the reverse is the case.”