Media personality, Tolu Demuren alias Toolz, has narrated how she and the members of her household tested positive for the novel Coronavirus.

The on-air personality, in a string of tweets, mentioned that she was mainly concerned about her two children but fortunately, they did not contract the virus. Toolz also revealed that they have all fully recovered in her home.

“Feeling super thankful to God today! This time last month, we were going through a very scary period! Almost everyone in our house (including myself) tested positive for Covid-19.

I was just about to return to work after my maternity, and it all started with Captain complaining of ‘malaria-like’ symptoms. He had them for a few days, and didn’t seem to get any better…so we ended up taking him to hospital.

He had taken a Covid-19 test a few days before which was negative, so I thought it was a bad case of malaria. He was admitted with malaria and a bacterial infection we were told. After being given intravenous antibiotics and other meds he still wasn’t getting better.

I decided to move him to a different hospital, and they tested again, and he ‘blew up’ the test according to the doctor. My body went cold, and my first thought was ‘OMG the babies!!’. Then a short while later, I thought about myself. I did a rapid test, and it was positive.

Neither of us initially had the common symptoms- no coughing, no breathing issues…although I later lost my smell and taste. Captain was in hospital for a week and this was around the time of the Lekki shooting, so I was doubly terrified.

My main fear was the babies…especially our youngest son as he was just about 3 months old. We didn’t test them, but I was certain they had Covid too as we literally kiss and cuddle our boys every day. The doctor assured us that they wouldn’t be affected.

Thank God the doctor was right, other than a sneeze here & there, our babies were perfectly fine. I was generally ok too, just scared. Once you get that positive result, you get all these random symptoms you didn’t have before. My back would hurt…I’d be like hmmm corona oo

The weirdest thing was the taste and smell thing. Everything Captain had tasted bad, he’s a foodie so that was strange. One of my super powers is my sense of smell…and it just gradually faded. I actually put a bottle of bleach under my nose one day and…nothing.

I kept waiting to fall ill, and it didn’t happen. I started thinking I had indaboski blood, but then I had 2 days where I felt like I had the worst hangover in the world, then there was some fatigue, but I was generally ok.

Captain on the other hand felt super rundown, couldn’t keep food down, had cramping all over and a bunch of other symptoms. After a week, he came back home, and we finished our isolation period together.

After 2 weeks we all retested and were all thankfully Negative. Thanks to Almighty God for seeing us through, a big thank you to the doctors that looked after us… especially Dr Majekodunmi of Eurocare for the constant reassurance, and for taking my a million and one calls.

I’m super thankful I didn’t get it while I was pregnant. Imagine I travelled to have my baby, came back, did a 7 covid tests, and it was the 8th that was positive. The craziest thing was that a week before I legit told someone that there’s Covid in Lagos anymore. Silly me”, she concluded.


See the tweets below: 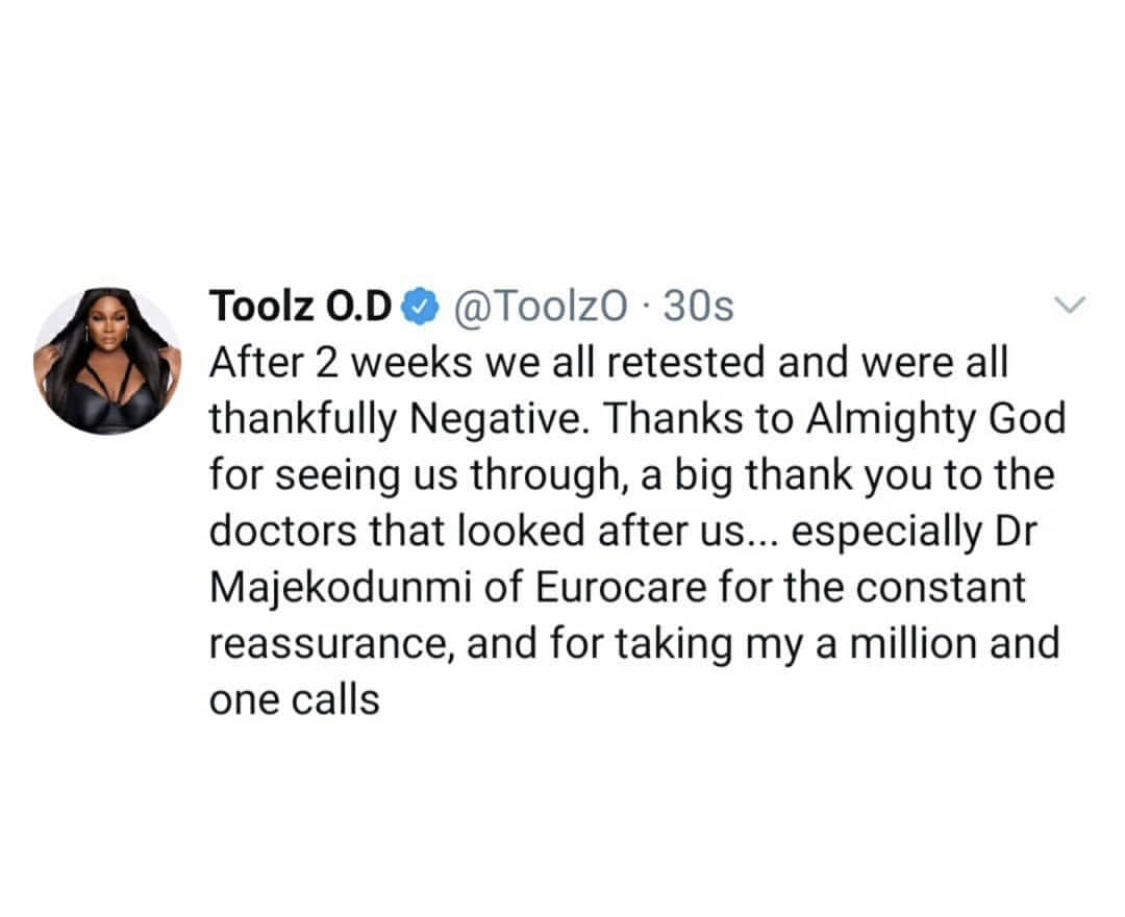