Edo State Governor, Godwin Obaseki has vowed that his administration would not negotiate with the leadership of the Nigerian Union of Teachers (NUT).

He stated that this would remain the order of the day as far as their demands would derail the programs he has designed for primary school in the state.

He accussed a segment of the leadership of the union of being politicised.

Obaseki stated this at a stakeholders forum organised by the State Universal Basic Education (SUBEB) with the theme “Improving collaboration in the provision of basic education” in Benin City on Monday.

At the event, he also stated that there is no going back in his quest to improve basic education, which he opined was the foundation of whatever the people are today.

He also stated that the last strike by primary school teachers was influenced by a segment of the leadership of the NUT he alleged was politicised.

He said, “What we saw the last time were not the teachers going on strike, it was a part of the leadership of their union that has become political that are playing politics with the lives of our children. We don’t have a problem with the teachers of this state but a section of the leadership of the union who have decided to politicise the issue and derail what we have started.

“As the Governor of Edo State that was elected by the people of the state, I am ready to fight with anybody in the state that wants to jeopardise our mission. So, we are not going to negotiate with that politicised section of the Union. We will not be intimidated. We are going to fight as long as you want to derail EdoBEST, it is not a threat but I just want to assure you that we have the mandate of the Edo people to move the state forward.

“I hear they are still threatening that the strike is not over, I wish them luck and I want you the stakeholders to join us to make sure that the right thing is done.” 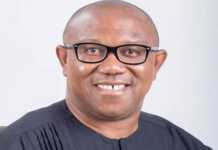