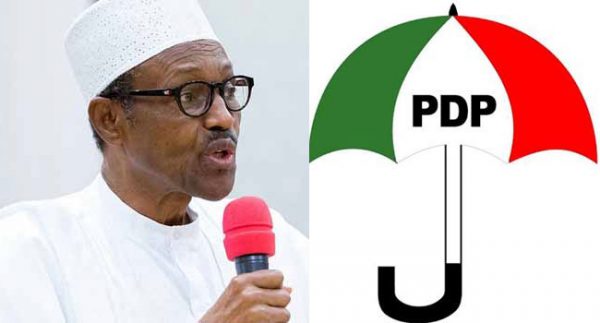 The Peoples Democratic Party (PDP) has challenged President Muhammadu Buhari to use the May 29 speech to accept his failure in governance and desist from further exasperating Nigerians with his usual prepared text of false performance claims and empty promises.

In a statement by the spokesman of the Party, Kola Ologbondiyan, the PDP also berate-d the All Progressives Congress (APC) for planning to beguile Nigerians again with a planned fictitious performance campaign, when, in reality, there is no landmark achievement it initiated and completed for the benefit of Nigerians in last six years.

The statement read: “President Buhari and the APC must know that Nigerians are no longer interested in their stage-managed Presidential addresses as well as the circus show of their so-called APC Legacy Awareness Campaign, particularly in the face of the horrendous situation they have plunged our nation.

“This is because, in the last six years, President Buhari’s speeches have always been litanies of false claims, empty promises and lame excuses for failures, which the APC, in its penchant for lies, propaganda and beguilement, wants to accentuate with their legacy awareness campaign.

“If indeed the Buhari Presidency and the APC have any achievement to showcase, would it be organising an awareness campaign to seek the understanding of Nigerians for its mass failures?

“It is trite wisdom that their works ought to be speaking for themselves like those of the PDP administration which are still being seen today in every sphere of our national life.

“If they have anything to show, would President Buhari be begging that history should be kind to him for his failures? Would he go to faraway Paris and France to declare that his administration is being plagued by ill-luck?

“Our party vehemently rejects this attempt by APC leaders to claim that their party failed because of the challenges that have befallen our nation when in reality, the APC and the Buhari Presidency should be held responsible for their own failures.”