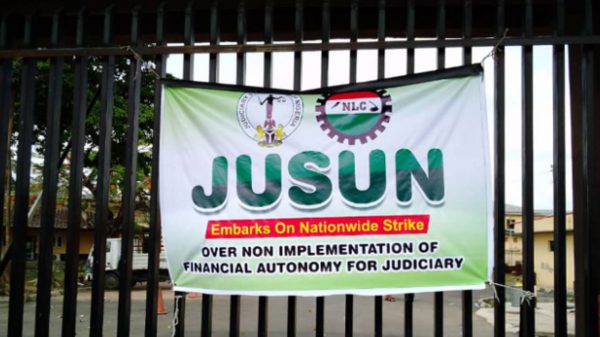 The Judiciary Staff Union of Nigeria (JUSUN) has decided to suspend its strike, which has been in effect for over two months, from Monday.

This decision was made during the National Executive Council (NEC) meeting held between the body and the federal government in Abuja.

The Chief Justice of Nigeria (CJN), Justice Ibrahim Muhammad, was in attendance as the National Judicial Council (NJC) met with JUSUN leaders on Tuesday, urging the striking court workers set aside their grievances with the government in the interest of the general public.

Last Saturday, the body had asked its members to endure the hardship occasioned by their ongoing strike a little longer, assuring that negotiations would soon be concluded.

JUSUN embarked on a nationwide strike on April 6 to demand full implementation of financial autonomy for the judicial arm of government. The negotiations aim to either reach an agreement on terms for implementation of the autonomy, and consequently end the strike.

The shutdown of the judicial system in the country has stalled several important proceedings such as the trial of former Petroleum Minister Diezani Alison-Madueke, in order to avoid gross abuses of rights, the National Human Rights Committee (NHRC) of the Nigerian Bar Association (NBA) had directed its members to visit police stations and  bail suspects detained for minor offences.

In May 2020, President Muhammadu Buhari signed an Executive Order granting financial autonomy to the legislature and the judiciary across the 36 states.

The Executive Order (No. 10 of 2020) made it mandatory for states to include the legislature and the judiciary’s allocations in their budgets’ first-line charge.

The order also mandates the accountant-general of the federation to deduct from the source amount due to the legislatures and judiciaries from the monthly allocation to each state for states that refuse to grant such autonomy.

JUSUN, on April 3, issued a circular ordering the closure of courts across the country from April 6 as a measure to ensure implementation of the order.