The Theatre Arts and Motion Pictures Association of Nigeria (TAMPAN) has summoned Yomi Fabiyi over the release of ‘Oko Iyabo‘, a movie on Baba Ijesha, his embattled colleague.

Released on Sunday, July 4, the movie has been condemned by netizens for portraying the incidents that led to the arrest of Baba Ijesha using the real names of all parties involved.

“The TAMPAN committee on ethics, conflict and resolution wishes to inform the general public that the association has summoned Mr. Yomi Fabiyi who is the producer/director of the controversial film titled ‘Oko Iyabo’ to appear before it on Thursday 11th July 2021,” the statement reads in part.

“This invitation becomes very necessary because of the controversy that the subject matter of his film has generated which is against our ethic and virtue.”

Read Also: TAMPAN Ban: “We Are Not Against Iyabo Ojo,” Says Jide Kosoko

“Despite that, we realise that the film has sparked off another round of public dissension that may bring polemic against TAMPAN and our good members if we fail to nip the bud of the controversy.”

“We hereby implore the general public and the parties concerned to please exercise patience as our eminent association is on top of this issue and will certainly ensure fairness and justice.” 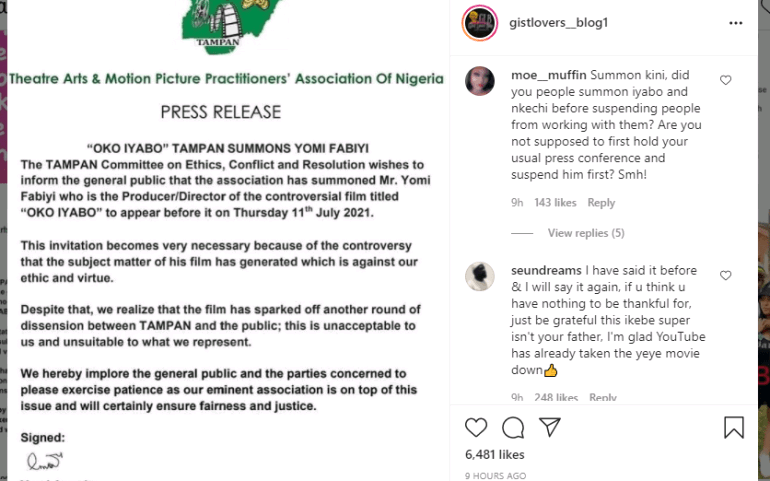