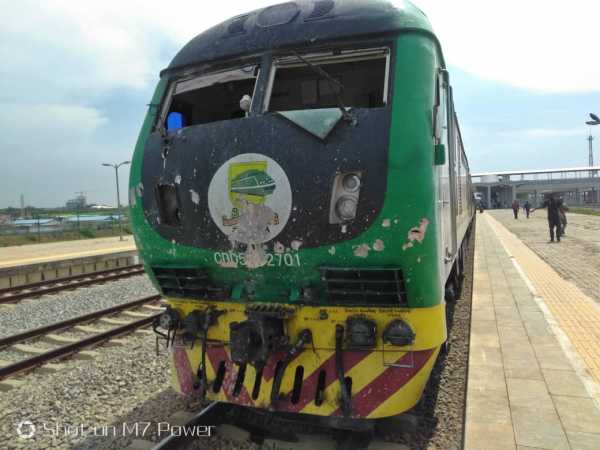 Information Nigeria gathered that the bandits first attacked the train on Wednesday night and successfully immobilized it after struggling to move for 7km after the attack.

The bandits, according to sources, return again on Thursday morning, and planted explosive device on the rail track.

“The bandits first attacked last Abuja-Kaduna train bearing number AK9 between Rijana and Dutse. The train came under heavy gunfire, but it struggled to stutter for about 7km and stopped as the gunshots damaged the fuel tank,” a staff of Nigerian Railway Corporation, NRC, told our reporter on the condition of anonymity.

“At the point of the attack, the train was unable to make contact with Abuja. Hours later, contact was made and a relief locomotive arrived past midnight.

“And then the morning train from Kaduna to Abuja, bearing number KA2, also ran over fractured rail tracks, but successfully completed the journey. Suspected explosives devices were planted on the track, but God in his infinite mercy saved the travellers and train.”

A passenger of the early morning train, Shehu Sani, a Senator who represented Kaduna Central in the 8th National Assembly, confirmed the incident on his Facebook page.

The Senator wrote: “Yesternight, Bandits attacked the Kaduna-Abuja train. They planted an explosive that damaged the rail track and shattered the windshield of the train engine.They also opened fire, targeting the Driver and the Tank.

“This early morning, I was on board when our train ran over another explosive damaged railings. The train nearly skid off its track, then we miraculously escaped.

“All Kaduna Abuja train operations need to be suspended for today until this issue is addressed.”

Although sale of tickets for the Abuja-Kaduna trains service was suspended on Thursday morning, the NRC is yet to speak on the situation.