Ekiti State Governor, Kayode Fayemi has called on secessionist groups in the country to embrace dialogue in the interest of keeping the country united.

Fayemi said this on Saturday at a public lecture to mark the 21st anniversary of the Aminu Kano Centre for Democratic Studies.

He stated that splitting the country into independent nations is not the solution to the challenges.

He added that secessionist groups should be summoned for dialogue and convinced to drop their agitations.

”United we stand, divided we fall. Countries like United States of America and former Soviet Union were united and that is the basis of their strength and weapon towards its continuous socio-economic development and advancement,” he said.

“All the aggrieved secessionist groups should be brought under one umbrella and dialogue, toward an amicable settlement of their differences, so as to remain united and indivisible.”

The governor emphasised that he is an advocate of a united Nigeria, adding that there is a strong tendency that there would be further splits if the country disintegrates. 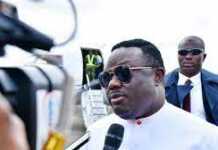