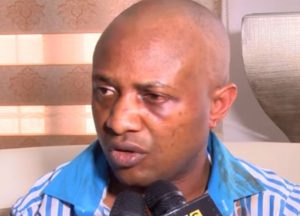 An Ikeja Special Offence Court in Lagos on Monday, gave a 21-year prison sentence to Chukwudumeme Onwuamadike, popularly known as Evans and his co-defendant Victor Aduba for kidnapping.

The billionaire kidnapper was prosecuted alongside Mr Aduba, a dismissed soldier on a four-count charge bordering on kidnapping and unlawful possession of firearms.

Sylvanus Ahamonu, a businessman, was allegedly abducted by the pair on June 23, 2014, held prisoner for nine weeks, and then demanded a $420,000 ransom from his family.

Upon arraignment, they pleaded not guilty to the four charges proffered against them.

Delivering judgement, the presiding judge held that the sentence would serve as a deterrent to other aspiring kidnappers.

READ ALSO: I Was Into Haulage Business, Not Kidnapping, Evans Tells Court

Justice Oluwatoyin Taiwo held that the prosecution had successfully proved the case of kidnap and possession of firearms against the convicts:

She said there was no proof before the court that three of the Evans men were killed by the police.

The judge said, “I have considered the allocutus of the defence counsel. This sentencing will serve as a deterrent to others.

“The sentencing will, however, run concurrently. They are hereby sentenced to 21 years imprisonment without an option of fine.”