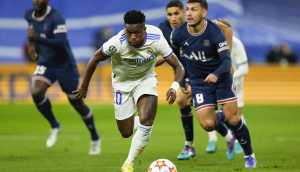 La Liga has condemned the  abuse towards Vinicius Junior in Sunday’s game between Real Madrid and Atletico Madrid.

Vinicius was referred to as a monkey on video before the game, and there were audible chants during the game.

Following the racial taunts directed at Vinicius Junior during the Madrid derby, La Liga has said that it will cooperate with law enforcement to track down those responsible.

A number of racist chants were aimed at Vinicius by Atletico Madrid fans before and during the match which Real Madrid won 2-1.

A spokesperson for La Liga has now said: “We denounce all incidents inside and outside stadiums. We work with clubs to keep our football friendly and enjoyable. Hate speech has no place in La Liga and we always work with the clubs and the authorities to identify and bring to justice any such case.”

Vinicius received a warning from Atletico Madrid captain Koke prior to the derby to “expect trouble” if he performed at the Metropolitano.

During the week, agent Pedro Bravo said, “in Spain, you have to respect rivals and stop playing the monkey,” and after receiving harsh criticism for his remarks, he later issued an apology.

Vinicius expressed his defiance in a social media post on Friday, writing: “Weeks ago, some people started to criticise my dancing. But the dancing is not mine alone.

“They say that happiness bothers. The happiness of a Black Brazilian being successful in Europe bothers much more. But my will to win, my smile and the sparkle in my eyes are much bigger than that.”