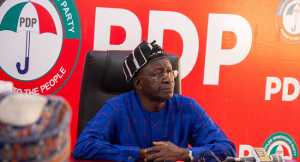 The Peoples Democratic Party’s National Executive Council has given Senator Iyorchia Ayu a vote of confidence, indicating that the party chairman won’t be stepping down anytime soon.

Ndudi Elumelu, the minority leader in the House of Representatives, made the motion for the vote of confidence in the PDP’s National Working Committee (NWC) at the BoT and NEC meeting that took place in Abuja on Thursday.

The vote was endorsed by a Kwara State-based NEC member, and Adolphus Wabara, the acting PDP BoT chairman, presided over it.

The PDP’s southern caucus has repeatedly demanded that Iyorchia Ayu, the national chairman of the party, step aside so that a southerner might take his place. However, with the vote-of-confidence, it is almost certain that Senator Ayu will not be leaving the position.

The PDP’s presidential candidate, Alhaji Atiku Abubakar, has responded to the situation by stating that the group is committed to finding a solution to its differences.

He claimed that arguments like the ones that just rocked the gathering were typical among families.

The PDP is the oldest party in Nigeria and has endured the test of time, the former vice president continued.

Atiku also emphasized that the PDP’s constitution serves as a guide for members’ behavior and the party’s actions, adding that any disputes must be settled in accordance with the party’s rules and guidelines.