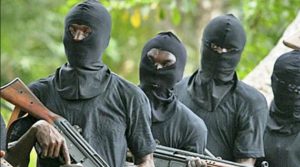 According to Ishaq Kasai, Chairman of the Birnin-Gwari Emirate Progressives Union, the terrorists also kidnapped 22 persons and stole motorcycles during the attack that took place on Saturday.

Kasai claimed that during the attacks, the terrorists also pillaged local businesses.

“On Saturday, September 24, 2022 around 7:30 pm, the terrorists invaded Hayin Gada of Damari Community in Kazage Ward, killed two locals (namely; Sanusi Zubairu and Kabiru Zubairu) and kidnapped 12 persons. They also looted shops in the same community during the attack.

On same Saturday, another group of terrorists killed one and kidnapped six persons at FARM CENTRE located around Birnin-Gwari/Kaduna Road. They also kidnapped four others at Dajin JANGALI and seized three motorcycles (Bajaj Model) from farmers at Kamfanin Doka area.

“BEPU observes with serious concern the way the terrorists continue to invade various communities and loot goods at shops unchallenged.

“The union will never relent in its continuous call on relevant authorities to intensify effort towards combating terrorist activities in Birnin-Gwari LGA especially at this early crop harvesting period.”

The state Command’s Public Relations Officer, Mohammed Jalige, when contacted on the telephone, did not take his call nor respond to a text message sent to him by one of our correspondents in the state.