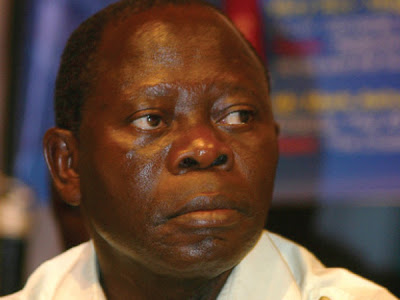 THE truce parley brokered by the Edo State governor, Comrade Adams Oshiomhole, between the Federal Government and the Academic Staff Union of Universities (ASUU), on Tuesday, was said to have been tempestuous.The meeting which began at about 7.30 p.m. on Tuesday ended at 4.30 a.m. on Wednesday without much progress made.

The action has now been shifted to Aso Rock, where Oshiomhole and the Minister of Education, Dr. Sam Egwu, have to once again meet with President Umaru Yar’Adua to brief him on the development.

A source told Nigerian Tribune that not much was achieved in the meeting because it was characterised by arguments right from the agenda drawn for the meeting.

The meeting, held at the National Universities Commission (NUC), had ASUU executive members led by its national chairman, Professor Ukachukwu Awuzie, while the Minister of Education, Dr. Sam Egwu, led the government team.

Oshiomhole had in his remark before the closed door meeting said the meeting was convened to revisit the dispute in the hope of finding an amicable resolution to the crisis.

He said, “This meeting was convened so that we can revisit the dispute between the Federal Government and ASUU and the aim is to find a common ground to proceed so that the dispute can be resolved and the universities restored.”

Nigerian Tribune gathered that the meeting was not centred on compelling ASUU to call off the strike or force the government to sign the draft agreement that has been the contentious issue, but to find a common ground on which to continue negotiations.

When Nigerian Tribune contacted ASUU president on his mobile phone, he declined comments on the meeting, saying he was not the convener of the meeting and that Oshiomhole should be the one to brief journalists on what was discussed.

But it was learnt that Oshiomhole made his intention to meet with Yar’Adua known before any further meeting. The Executive Secretary, National Universities Commission (NUC), Professor Julius Okojie, had, however, at an event in his office on Wednesday while making reference to the meeting, said reasonable progress was made.

Meanwhile, the ASUU, Owerri zone, on Wednesday, staged a peaceful demonstration on major roads in Owerri, the capital of Imo State, down to the Government House, to hand down their protest letter to the state governor, Chief Ikedi Ohakim, for delivery to President Umaru Yar’Adua in Abuja.

In the letter signed by ASUU’s zonal coordinator, Owerri, Dr. S. M. Nzota, and his colleagues from the Federal University of Technology, Owerri (FUTO) and Imo State University (IMSU), Dr. R.A. Ejimofor and V.C. Nwulu respectively, they appealed to President Yar’Adua to urgently intervene to save Nigerian universities from total collapse.

According to Dr. Nzota, who read the letter, after two years of painstaking negotiation, the agreement arrived at promised revamping of public universities in Nigeria as well as stopping the rot in the system.

He said, “unfortunately, this agreement has been subjected to serious misinterpretation by government machinery and bureaucracy.