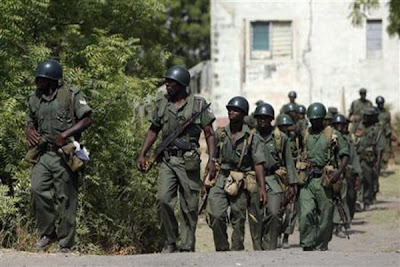 Cameroon soldiers are taking advantage of the absence of Niger Delta militants in the Gulf of Guinea by terrorising Nigerians fishing or doing business there.

Just yesterday morning, the gendarmes killed six Nigerians in Bakassi territorial waters 10 days after the militants surrendered their weapons and left the creeks of Bakassi peninsula.

Frank Dudu, one of the leaders of the militant groups that turned in their arms on September 25 at the headquarters of Bakassi Local Government Area, revealed that the Nigerians, made up of fishermen and businessmen, were killed in an unprovoked attack.

He said intelligence reports reaching him from remnants of Bakassi Salvation Front and Bakassi Freedom Fighters still holding forth at the creeks indicate that some Nigerians were killed in the high seas of the peninsula on Thursday following a raid carried out by the gendarmes.

The reports said the gendarmes on a routine patrol of the island swooped on the Nigerians at Abana and Atabong areas of the peninsula which are one and half hours boat ride from Ikang near Akpabuyo Local Government Area. Ikang is the headquarters of the new Bakassi Local Government.

Shortly after killing the Nigerians, the soldiers took off but not without warning other Nigerians to stay off their (Cameroon) territory following the ceding of the oil-rich island to the Republic of Cameroon based on the World Court judgment of October 10, 2002. Nigeria’s sovereignty over Bakassi faded into history on August 14, 2008.

Mr. Dudu said if the militants had not left the creeks, the gendarmes would not have ventured in as members of Bakassi Salvation Front and Bakassi Freedom Fighters in the last five years, protected the Nigerian end of the island despite the judgment at the Hague. He called on the Nigerian government to step up security if its citizens in Bakassi as the Cameroonians have become very brutal and hostile.

He said that if Nigerian security personnel do not halt the insurgency of the gendarmes on Nigerians fishing or trading in the peninsula, both militant groups might be forced to return to the creeks to do so as those being killed were their brothers and sisters struggling to earn a living.

Mr. Dudu denied that they were using the shooting incident as an excuse to go back, saying that having surrendered their arms under the terms of the amnesty, they can not take up arms again.

He advised the Nigerian government to investigate the Thursday incident as they were not making unfounded allegation against Cameroon adding that ever since they vacated the creeks, the Nigerian navy and other security operatives have not bothered to patrol the island leaving Nigerians still living at Abana,

Atabong, James Town, Archibong Town and other settlements at the mercy of the gendarmes.

He said after killing the six Nigerians, the soldiers took away their money, fish, and other valuables. There was weeping and wailing by other Nigerians who watched the gory murder, he said.

Mr. Dudu and other militants are in a rehabilitation camp at Akamkpa about 50 kilometers from Calabar, capital of Cross River State. Some leaders of the two groups stay in a hotel in Calabar.
Source: 234next.com
JOIN THE FASTEST GROWING NIGERIAN FORUM