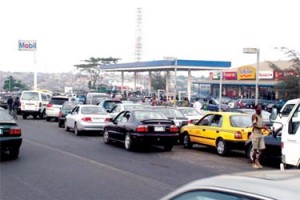 The National Union of Petroleum and Natural gas Workers has issued a 14 days ultimatum to the Federal Government over alleged lopsided distribution of petroleum products by the petroleum Products Prices regulatory agency.

The President of the NUPENG, Mr. Igwe Achese, issued the ultimatum on behalf of the National executive Committee of the union in Abuja, shortly after a 21-day ultimatum issued on the state of roads in the country was called off in Abuja on Friday.

Igwe said that the NEC of NUPENG took the decision to suspend the earlier ultimatum because of the observed improvement in the rehabilitation and construction of highways in the country.

He also said that another touchy issue that had to do with casualisationm of workers and their prevention from union activities by multinational oil companies was effectively addressed by the Minister of Labour and Productivity, Chief Emeka Nwogu, who was said to have agreed to ensure urgent reconstitution of a casualisation/contract committee on the workers casualisation in the upstream and downstream sectors.

However, in spite of the agreement reached between the Federal Government and NUPENG on the two issues bad roads and casualisation, there are ominous signals that unless urgent steps are taken to address a lingering face off between NUPENG and PPPRA, there will be a serious fuel crisis in the country in the next three weeks.

Igwe and indeed the top leadership of NUPENG alleged that the PPPRA was not transparent in the allocation of petroleum products to marketers and depot owners.

The union leader said that the PPPRA was depriving NUPENG members who had storage capacity of the allocation due to them , and were giving such allocations to businessmen without the necessary facilities and the requisite experience in petroleum marketing.

Specifically, he said that the reservation expressed by NUPENG on the way allocations were being handled by the PPPRA had not been addressed.

Igwe said that 60 percent of those allocated petroleum products did not have the capacity required by PPRA.

He explained that the NEC opted to issue a 14-day ultimatum to commence from Monday to call the attention of the government to the alleged anomalies involving the distribution of petroleum products in the country.

He said that at the expiration of the ultimatum, NUPENG would ensure that its members were prevented from buying products from ”the portfolio carrying business men without facilities.”

He also said that the union would shut down the operations of all private and government depots if steps were not taken to address the observed irregularities of the PPPRA in product allocation.

He challenged the Chairman of the Board of the PPPRA, Chief Ahmadu Ali, to publish the allocations for the first, second and third quarters to ascertain the veracity of the NUPENG‘s claim.

”We have issued a 14-day ultimatum to the Federal Government to address the issue of the PPPRA. We have complained to various agencies of the government without a response on the issue. If nothing is done about these irregularities, we will shut down all private depots in the country. We will also shut down all public depots.

”We will not buy products from all the portfolio carriers who are given allocations without facilities.

”The 14-day ultimatum starts from Monday next week. If government does not act to address the matter, Nigerians should not hold us responsible for what would follow. It is because we want this issue to be sorted out that we are still giving these 14 days,” he said.

He lamented that issues regarding the allocation of products were not taken to the meetings of the board of the PPPRA of which he was a member.

He also said that NUPENG would be on the Road Monitoring Team of the Federal Ministry of Works to ensure effective monitoring of the level of seriousness and progress of work on the roads.

He said that the union expected a prompt reaction from the government as NUPENG would not allow a situation that would culminate in avoidable loss of the lives of its members due to poor roads in the country.