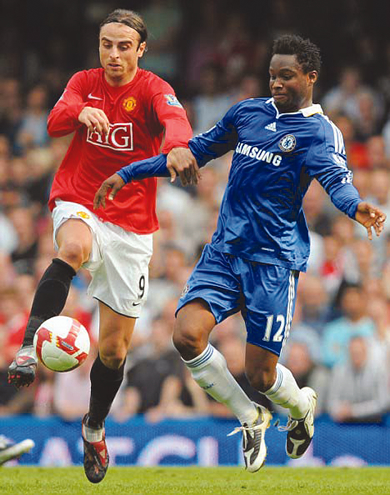 Chelsea midfielder Mikel Obi has said he is frustrated after being snubbed by manager Carlo Ancelotti in some of their games last season.

Mikel was the first player in the team to get 20 starts last season but a knee injury ruled him out of action for five weeks. Even after recovery, he was not considered for crucial matches by Ancelotti.

“I had a good start to the season till about January but when the club had a bad run it affected everybody and it affected my game as well. Everything just went downhill,” the former Lyn Oslo player told Chelseatv on Wednesday.

“I was playing every game: Champions League, Premier League but suddenly we all had a bad run which went on for about a month or two.

“I had injury in the middle of that as well. I had few injuries with my knee and I was out for four or five weeks and when I came back I wasn’t playing regularly; just a few games. It was kind of frustrating for me, and I think the club also had some frustrating time.

“I got a feeling during trainings when I know I’m going to be playing (the next match), different from when I’m not sure I’ll be playing or not. It’s very difficult for me as a young player but I’ve learnt to deal with it.

“Every season you’re going to have a period when things are not going well for you and other times when things are going well. You have to try and manage both. I just try to stay professional and train and forget about it. I play when I get the opportunity.”

Mikel said Ancelotti had a reason for not selecting him for games and that his exclusion pushed him to work harder.

“When I’m not playing, the manager has a reason why he’s not picking me. That was when everyone saw how disappointed I was that I’m not being picked in the team. It was a period for me to keep my head down and work really hard and try to change different things. And all of a sudden, towards the end of the season it was like I came back to my best again,” he said.