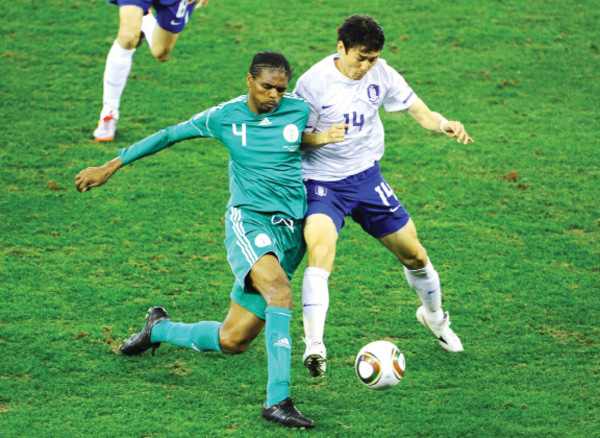 Former captain of Nigeria’s national team, the Super Eagles and newly appointed football ambassador, Nwankwo Kanu, says he has no reason to regret his decision to call it quits with the Super Eagles even though the team seems to have found a new rhythm under new coach, Samson Siasia.

Kanu, who was at the Abuja National Stadium to watch the Eagles play both the Ethiopian national team and the Harambee Stars praised the new spirit in the team but concluded that he has done his part and thus has to move on.

“No, I don’t think the timing was wrong” he said. “I have served the country the best way I can and I have to give others the chance to prove themselves. Nobody knew I could go this long after my heart problem but I thank God and all the fans for supporting me all through”.

Kanu’s last assignment for the Eagles was at the South Africa 2010 World Cup where the team failed to make it beyond the first round of the tourney thus capping a series of woeful performances by the team.

Nevertheless, with a career spanning over 17 years, Kanu declared that he is a fulfilled man and is only looking forward to his testimonial match in Lagos to officially end his international football career.

The testimonial match between Kanu and Friends (a selected World XI) and the Nigerian national team has been tentatively slated for June 11, 2011 in Lagos.

Kanu’s friends, mostly his former teammates from Ajax, Inter Milan, Arsenal, West Brom and Portsmouth along with some selected star players are expected to face a Nigerian All Star team dating from the Super Eagles teams of 1993/94, the Olympic Gold medal winning team of 1996, and some players of the current Eagles squad who played with Kanu.

Among the notable soccer stars who are expected to grace the event are Patrick Vieira, Ronaldo, Samuel Eto’o and Emmanuel Adebayor amongst others.

Proceeds from the event according to Kanu will be channelled to his charity organisation, the Kanu Heart Foundation (KHF) that is currently planning to build a heart specialist hospital in Abuja.