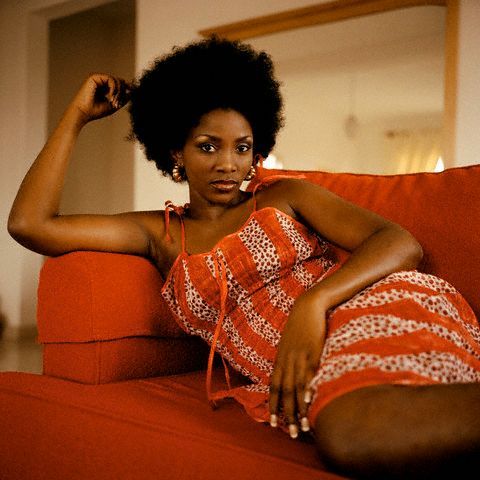 What is it about Genevieve Nnaji that makes her tick?

I think (it is) just being me.

What kind of person are you outside of the TV screen?

I’m actually your everyday girl. I’m your regular next-door girl. I don’t think there’s anything necessarily special outside of the God-given talent that I have and that I’ve decided to put to use. Despite my shortcomings, despite my imperfection and it has worked for me. I just think I’ve been able to manage and make do with what I have and basically be content with what I have and make it work for me; and being able to do that regardless of naysayers and doubters and lack of support to keep my fans happy.

You started out as a regular girl.  Twelve years down the line you’re the biggest actress in Nigeria, what is the secret of your success in acting?

It has been nothing short of staying true to the art. I have stayed as professional as I can. I have given my work and my craft as much attention as it needed. I have respected myself as an artiste. I think just giving it your all and not deviating from the fact that all you want to do is act. That’s all I focus on and you can tell that from my movies.

Times have changed, there was a time you were a constant face in all the movies we had, now we hardly see you, can you tell us what you’re working on these days?

The reason for the change is that Nollywood was all about quantity in the beginning and it’s growing and evolving. With evolving comes change and with change we hope, comes improvement. I’ve decided that I want to be among the change in time. I’m going to help it improve and in doing that you have to watch out for the kind of jobs you do, the kind of jobs you want Nollywood to shell out. You support the kind of movies you want people to see Nollywood producing. So far, I’ve been privileged to have done a few features like Ije, Tango With Me (that is in cinemas now) and The Mirror Boy, which is going to be premiered here soon. I have enjoyed working in a professional environment and I don’t see myself going back into that mediocrity that we were so used to in Nollywood.

How has The Mirror Boy impacted on your career?

It has done the same thing Ije and Tango With Me have done. It was less challenging than Ije and Tango, to be honest. But it was a good thing because it was the first time I was shooting in the UK and it was the first time I was visiting The Gambia. So it was good to play somebody outside a Nigerian because I played a Gambian (woman). I don’t think I did anything extraordinarily necessarily because the script was originally written for a Nigerian setting.

Let me take you to Ije where you starred opposite Omotola Jalade-Ekeinde, over time there have been stories of an intense rivalry between the two of you, the biggest female actors inNollywood.  Was there really a rivalry?

There’s competition in any field. Rivalry is a personal thing, you choose who you want to see as your rival. I do not see anyone as a rival but I have competition. There’s competition out there because you know the only actress who is good but when you see someone as your rival, it means the person intimidates you. I’m sorry, but I’m not one of those because I think everybody is unique in (his or her) own way and all I do is focus on what I can do. I will never try to outdo anyone. I’m going to try to continue being the best I can but I’m not going to work with somebody as a yardstick or somebody I want to outplay. Because if you do, you will either over-act or under-act and you just won’t be yourself. So in terms of rivalry, no it was a rumour.

When you acted with Omotola in Ije, how was your relationship on set?

Omotola and I are colleagues. We are not friends in the sense that she’s one of the people I hang out with – my buddies. In the entertainment industry, she’s one of the people that I respect as an actor. Acting with her is always interesting. She is a unique individual. She is very entertaining and you just have to learn to deal with everybody individually. And that applies to her and everyone else.

Where is Nollywood heading 10 years from now?

It’s a slow and steady process and we are getting there. I see a recession right now and there is a change that is coming to Nollywood. It’s obvious. Having had such great attention from President Goodluck Jonathan, just that embrace from the private sector, from the banking sector, from a lot of people who are coming in now and showing lots of interest that means there is room for change. Even having the funds that the President has given us to help improve production shows that change is coming. The change will come, (but) not everybody might be part of it but a new industry is building and it has to be one that would only carry along people who are passionate about the craft and not people who are there for the fame and the money but basically true talents.

You’ve made recent movies Ije and The Mirror Boy whose producers have been based in the West for a long time.  Do you think the salvation of Nollywood will come from abroad?

Nollywood was built by people who trained here. Nollywood is about originality. Sometimes even the country needs help from foreigners, so the good thing is that these people are not strangers. It might be Nigerians from the Diaspora who have learnt one or two things and are coming back to impact their knowledge which is a good thing. It’s not like we have the facility to improve on the knowledge of film making here, hence people abroad are coming in and bringing their knowledge.

There is this film you acted with Desmond Elliot; you acted a blind girl. What was your challenge acting that role?

Till today, that is one of the movies I’m probably the proudest about. I watched it; it’s Wind of Glory. I don’t know the titles of most of my films but I know that one. When I watch myself and I’m not convinced about my performance then I feel people too will feel I kind of messed up there. But I watched that film and I convinced myself that I was blind and I was proud and I gave myself a pat on the back that, “Yes you did well”. I’ve been asked if I did any kind of study or research for that film, to be honest I didn’t. For me, acting is all about imagination. It’s bringing to life not just the imagination of the character, but that of the imagination of the writer. You have to walk in the shoes of the character and be that character and not just pretend to be that character.

Tell us about the news making the rounds that you will be appearing in the next James Bond movie.

(Laughs) I overheard the rumour but I don’t think it’s a rumour because the movie hasn’t been shot yet and so I’m waiting for the call. I’m on standby. I always say, ‘from people’s lips to God’s ears’.

You had a brilliant music video with Dbanj in Fall in Love, you guys had great chemistry and there have been rumours that you two are an item. He was at your birthday party in London in May, if all the circumstances are right, will you say yes to marriage with Dbanj?

First of all I have to agree within myself that I actually want to get married. If I would marry him, I don’t know. I think my life is already chaotic as it is being one celebrity. So, it’s a no.

When you talk about not getting married, what is it with marriage that you find repulsive?

No, I don’t find marriage repulsive but everyday I learn from married people about what not to do when it comes to marriage. I think I’ve just learnt the bad things about marriage before the good ones. There is constant discouragement but I just know for a fact that when I find the right person I will definitely not think about it.  Marriage should be about finding the right person, finding your soul mate, not necessarily in receiving love.

You’ve not met that person yet?

Seeing that you’re so busy, how can a guy break down the barriers and show love to you?

Tell us about when you started out; were you ever romantically involved with any producer to get a role in movies? What would you advise young people hoping to make a living in the movie industry?

I thank God, and having my family behind me, and self-belief helped. I’m a firm believer in the thought that one cannot be corrupted unless one wants to be. I wasn’t sexually harassed by anybody except one time but it wasn’t like you didn’t have a choice. I think every woman has a choice. No producer in his sane mind will see raw talent and will not want to exploit it and ask for sex in return. I just think that sometimes, people get carried away and are too desperate and I’ve heard of situations where girls actually give themselves. That’s not how I started. I basically just worked. And in working I made my point so that at the end of the day you say hard work pays. And I try to improve myself as often as I can.

First of all, my life is really all about being in the public eye and having to be photographed and having to be with people and having to go to places doing the fun things, it so happens that doing the opposite is how I unwind. To unwind I don’t go out, I don’t surround myself with people. I stay indoors and catch up with TV series. I live a normal life that everybody does. I probably do mine in excess because my life is exposed in excess. I do it just being by myself and chilling.