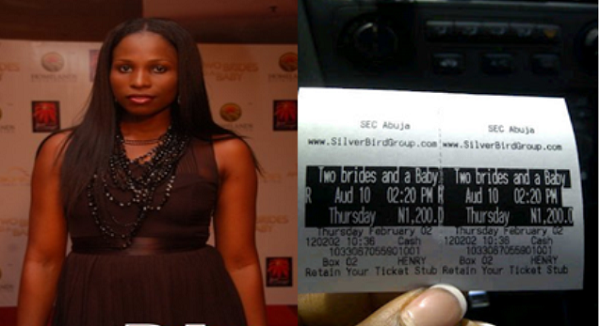 Nollywood producer Blessing Effiom-Egbe, the producer of the hit movie “Two Brides & A Baby” is suing Silverbird Cinemas to the tune of 500 Million Naira for having deprived her of earnings from the movie in which she invested so much.

In what is tipped to be the Scandal of the Century, Nollywood producer Blessing Egbe has dragged the management of SilverBird Cinemas to court over what she perceives as sharp practices by the Group!

A very pained Blessing said that since screening the movie, she is yet to receive a single kobo from her investment even though the movie was screened to packed halls in Lagos, Abuja and Port Harcourt for over two months! Not only that, she says she was told the film had stopped screening in all cinemas of 13th of January only for her to discover it was not the case as the film continued to screen well into till February! And she has the evidence to prove it!

‘This movie cost me over 12 million naira to shoot, without counting the cost of hosting the premiere and to be duped like this is not something I will take sitting down! This is money I got from investors … how will I pay my investors not to mention making a profit when they are behaving like this?’ she said. She has contacted her lawyer and is suing Silverbird to the tune of N500 million naira!

Also listed in the suit are Mary Ephraim of OKHMA Global Limited, the distributor that co-ordinated the deal.