Right in the heart of Araromi local Government, the vigilante group of Ijumu Local Government Area of Kogi state handed over two persons caught with human skull to the police for prosecution.

It was reported that neighbors became suspicious of the   two persons whose names were given as Muri and Joshua after their sudden flamboyant way of life which prompted them to launch a complaint to the head of the community.

The community head, it was gathered detailed some members of the vigilante group to monitor the movements the two friends to ascertain the truth behind the allegation of their neighbours.

The vigilante group followed the duo to the village burial ground where the two were nabbed while exhuming a corpse from the grave yard.

The vigilante subsequently arrested the duo and led them to the village head where they confessed to the crime and hinted that one Prophet Samuel from the village has been buying  human skulls from them for N40,000.00 each.

The village head was said to have handed the duo to the police and the case has been set to be ready to be charged to court. 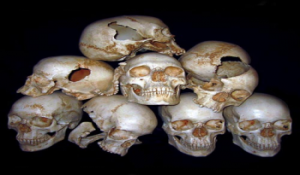