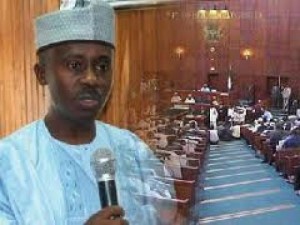 The House of Representatives  at its emergency meeting has today suspended the embattled Hon. Farouk Lawan as chairman of the bribery allegation riddled fuel subsidy probe committee.

Lawan is also suspended as the Chairman of the Education Committee of the House.

Speakier of the House Hon. Tambuwal ordered the Management of National Assemblyto investigate the embattled Secretary of the subsidy probe panel and staff of the National Assembly, Boniface Emenalo.

The Company in the midst of the bribery allegations, Zenon Oil, owned by business tycoon Femi Otedola, has been asked by the House to pay back $232m to federation account.

Tambuwal says the House will stand by the Report of the fuel subsidy probe.

In another twist to the bribery saga, legislators passed a vote of confidence on the leadership of the house led its speaker Hon Speaker Aminu Waziri Tambuwal.