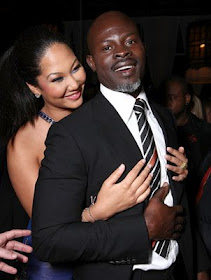 If current reports are anything to go by, then the marriage of Hollywood celebrity couple, Djimon Hounsou and Kimora Lee Simmons might be heading to oblivion.
According to NY Daily News, the couple are no longer committed to each other as they used to, citing a big fight over money as the cause of the rift. The report also added that the couple have ‘split’.
It was also gathered from the report that the ‘Gladiator’ star walked out on Kimora, stating that the squabble that led to the split was prompted by Kimora’s hip-hop mogul ex-husband, Russell Simmons decision to stop funding the pair’s lifestyle.
It was also reported that over the Christmas and new Year holidays, there was ‘tension’ between Hounsou and Simmons, stating that at a party organized by Kimora’s ex, she left Djimon to attend to attend to the kids while she socialized with her ex.
By Adaeze