It was reported that this lady poured a hot water on her stepson just because he beat her daughter the previous day. It is obvious in Nigeria that molestation of this sort, alongside many other vices have been growing seriously right before our eyes. Ola, the burned stepson, who was reported terribly injured and receiving intensive treatment at the hospital, had the following to say.

“The argument that led to the sad incident started when my step-mum saw me beat my sister” recalls Ola, she got very angry and wanted to harm me back in anger, she reached for and did all she could physically, I tried to defend myself but she overpowered me. She got more furious after my father and some neighbors tried to stop her, and she started scattering the house and even broke bottles. My uncle who also lives around was able to drag her away from the house, and she slept over at his’ that night. I was still sleeping on my bed the next morning, when I she walked into my room and bathed me with hot water; I staggered to the living room and saw my father and uncle. That was the last I remembered before I passed out and woke at the hospital’.

The father said his brother came into the house around 4:30am the next morning to settle the rift that occurred the previous day; they all sat in the living room, when the wife stood up and went into the kitchen. She was going in and out, and they thought she was preparing herself for work, not until Ola walked out of the room, looking weak and skin peeled, and fainted on the ground. We quickly rushed him to the hospital, while she stood staring and mocking him for calling out for help.
The case has been reported at the police station, while the boy is still at the hospital wallowing in serious pain, and the step-mum on the run. 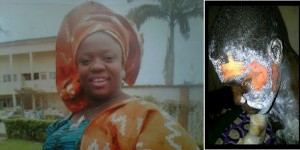 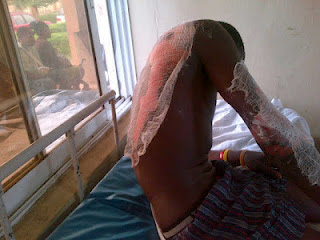