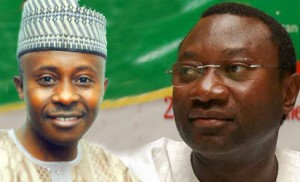 The Chairman, House of Representatives’ Ad Hoc Committee on Fuel Subsidy probe, Farouk Lawan, while presenting the 210-paged Fuel Subsidy report to a plenary session of the House of Representatives, on the 21st of April, moved a motion of recommedation that two companies should be removed from the list of companies indicted by the committee for receiving forex from the Central Bank of Nigeria but failed to bring in the fuel.

The companies, Synopsis Enterprises Limited and Zenon Petroluem and Gas Limited were removed from the list via a unianimous decision by the House.

Both companies belong to billionaire and oil mogul, Femi Otedola.

The startled deputy Speaker, Emeka Ihedioha, who was presiding over the plenary asked the chairman of the probe committee that, “Honorable farouk, is this recommendation coming from your committee?”

And Mr Lawan answered in the affirmative.

However, Mr. Otedola on the 11th of June, in an interview with a national newspaper alleged that Mr Lawan had demanded a $3million bribe from him, days to his (Lawan) presenation of the report, so that his two companies will be removed from the list of indicted companies.

Mr Otedola in a sting operation, allegedly coordinated by the State Security Service (SSS), gave the lawmaker, the sum of $620,000 in part-payment for the bribe.

Mr Lawan in a swift reaction on Sunday, denied accepting any bribe from the oil mogul.

He however revealed the following day, that he accepted the money in ‘another’ sting operation involving the police authority.

The House of Representatives, which has been on a one week recess on Wednesday, called short the break for an emeergency plenary session, to hold on Friday (15th June 2012).

The House is expected to make its stand known on the scandal during the emergency session.