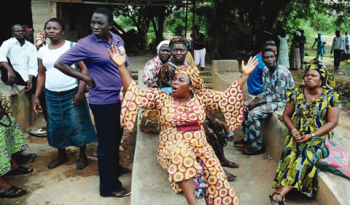 Juliana Oluwafemi, a 50-year-old widow, was said to have committed suicide by hanging in Apata Elere area of Ibadan, Oyo State.

Oluwafemi,  who is popularly known as Iya Iyanu, was said to have been found hanging on a tree close to the Odo-Ona River, Apata on Monday.

A youth leader in the community, Mr. Ayodele Obaro, who spoke with journalists on the issue, said the deceased was discovered around 8am by mechanics that had gone to the river banks to defecate.

He said, “When I heard about the incident, I reported to a nearby church, Saint Paul’s Anglican Church and they later informed the police.”

According to the younger sister of the deceased, Iya Subomi, Juliana was declared missing on Saturday after efforts to trace her whereabouts failed.

She said, “She came to her son’s house at Odo-ona on Friday and was left at home by her son who went for a vigil.

“However, by the time he came back on Saturday morning, he did not see his mother at home.

“Her disappearance was suspicious, because she left the house without her shoes and phone.”

Subomi added that someone informed her that a dead woman was found hanging on a tree by the river. She said after she was shocked to discover that the dead woman was her sister.

Subomi said, “Her business was thriving and her children were doing well. I am also very sure that she was not in debt. I cannot say why she decided to take her own life.”

Efforts to get comments from the police were abortive as the Police Public Relations Officer, Mrs. Bisi Inobanafor, could not be reached.