Marta Umbelina pulled up in front of her house with her 11-year-old daughter. When she stepped out of the car, she was shot 10 times in the back. 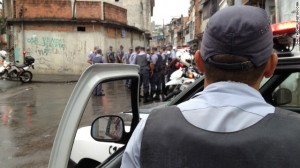 Umbelina was an office worker at Sao Paulo’s Military Police Northern Command — and she is one of nearly 100 cops murdered in Sao Paulo this year, roughly 50 percent higher than 2011.

Most were ambushed while off duty, part of a deadly battle between police and Brazil’s biggest criminal gang, the First Command of the Capital or PCC by its Portuguese acronym. “Marta was my friend, my colleague, she knew everything about me,” said Simone Mello, a police officer who worked with Marta at a desk job. “Why her? Why Marta? We’re just very sad,” she said.

In a bid to rein in the PCC, Sao Paulo launched Operation Saturation at the end of October. The government sent at least 500 police troops into the city’s biggest shantytown Paraisopolis, or Paradise City. They arrested dozens of alleged gang leaders, confiscated arms and drugs and even found a list with the names and addresses of 40 military police on it.

But police aren’t the only casualties in this escalating war. The number of homicides in Sao Paulo has jumped to almost 1,000 so far this year, largely concentrated in favelas or slums. For January to October 2011 there were 869 homicides, according to Sao Paulo government figures.

Some police are also being investigated for execution-style murders. “Poor neighborhoods are caught in the crossfire,” said Camila Nunes Dias, a professor at the Center for the Study of Violence at Sao Paulo University. “They suffer the consequences and we know that a lot of innocent people are being killed.”

She said she believes the spiral of violence began in May when the Sao Paulo state government took a more aggressive stance against the PCC and drug gangs.

The PCC got its start in Sao Paulo prisons and often controls the country’s drug trade from jail cells. The Justice Ministry recently offered to send in Army troops to help quell the violence, as it has in done previously in Rio de Janeiro slums.

But the Sao Paulo government declined the offer. Instead they agreed to have alleged gang leaders transferred to more secure federal prisons and share intelligence more efficiently. In the meantime, Operation Saturation has spread to other slums.

Police traverse the steep hills and sprawling shantytowns on horseback and motorcycles carrying out raids. On a recent incursion into the northern favela, Brasilandia, police formed a human chain as they climbed the steep hills with their guns drawn. They frisked young men and pulled over motorcycles, suspected of carrying anything from drugs to hired killers.

Residents of Sao Paulo’s slums are divided. “It’s a relief, it’s very quiet now,” said an older woman on her way to work. But another woman carrying her baby said: “Now that it’s full of police, I get very scared. I get worried about a shootout or confrontation.”

Many argue that when the police leave, things will revert to the brutal status quo unless far-reaching community projects are introduced to improve public access to services like schools and hospital.

“It’s not just a question of sending in police,” said Joildo Santos, a spokesman for the Paraisopolis Residents Association. “You have to have public works that give young people opportunities, alternatives.”