Sam Dede, Nollywood Al Pacino, as he is monickered, is grieving the departure of his mother, Elsie Iyenginagbaibo Godpower Abel Dede, who died at the age of 86. 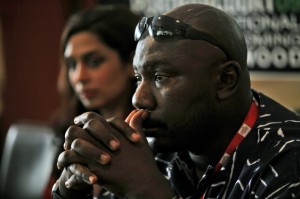 A statement signed by Sam Dede, a respected Nollywood actor and current Director-General at Rivers State Tourism Board, says the remains of the acclaimed philanthropist and community leader will be commited to Mother Earth at the family House, Okrika, Rivers State on Saturday November 24, 2012.

The statement reveals that the burial arrangement commences with a Service of Songs at Port Harcourt Civic Centre by 5.p.m. on Thursday, November 22, and ends with a Thanksgiving Service on Sunday, November 25, at St. Peters’ Cathedral, Okrika.

The late Mama Iyenginagbaibo was until her graceful end a benevolent woman and foremost business mogul who contributed immensely to the development of her community.

She is survived by four sons, four daughters and many grandchildren.